RECTOR OF the  NORTH CAUCASIAN STATE HUMANITARIAN AND TECHNOLOGICAL ACADEMY 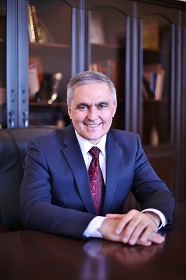 He started his education in 1979 - Stavropol Aviation Training Center, qualification - the pilot of fighter aircraft (A-29 Ooty-MiG-15, MiG-17).

1991 - Academy of the Ministry of Interior of the USSR, Rostov Department, qualification - lawyer.

1997 - Postgraduate Legal Academy of the Ministry of Justice, PhD.

Created with Mozello - the world's easiest to use website builder.
.